I was born in a small mountain village high above Lake Garda and have been dedicated to the interpretation of Early Music for more than fifteen years now playing early harps without mechanical parts and with my singing.
The instruments I use are the Gothic harp (Medieval), the Arpa Doppia with two rows of strings (Renaissance) and the Arpa Doppia with three rows of strings (Baroque) whilst my voice range is a Mezzo-soprano for chamber music.
During my career, which has spanned the last fifteen years or so, I have played Basso Continuo in Europe, Africa and South America in accompaniment to renowned singers of Early Music among which are Cyril Auvity, Gemma Bertagnolli, Rosa Domínguez, Adriana Fernandez, Montserrat Figueras, Mariana Flores, Fernando Guimarães, Philippe Jaroussky, María Cristina Kiehr, Emma Kirkby, Guillemette Laurens, Josè Maria Lo Monaco, Martin Oro, Nuria Rial, Victor Torres, Jan Van Elsacker and Furio Zanasi.
For the last few years, as well as accompanying on the harp, I have been playing solo with an authentic solo harp repertoire, with popular repertoires suitable for several types of audience, for educational projects, with "therapeutic listening" repertoires in several different social sectors and have also performed duets with myself with the intention of reviving the ancient practice of accompanying oneself while singing.

The Arpa Doppia in the Representation of Antiquity 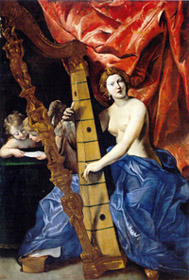 In the last few decades, numerous models of historical harps without mechanisms have been brought to use again. The most popular among these is without doubt the Arpa Doppia, the Italian Baroque chromatic harp with three parallel rows of strings, an instrument which has attracted new generations of harpists and a learned audience interested in performances on original instruments.
In depth research carried out in recent decades has established that harps with several rows of strings existed as early as the XIV century but it was at the end of the XVI century that harps with more than one row of strings started to acquire their own precise standing.
In Italy the harp aptly met the musical needs of that particular moment in history and on acquiring an ever greater number of strings it became known as the Arpa Doppia and soon two types were distinguished although they both maintained the term "Doppia" even in light of their differing structure.
The first model of which detailed annotations are made in Dialogo della musica antica et della moderna of 1581 by V.Galilei (1520-1591), was equipped with two rows of strings; the second model represented a natural progression from the former and had three rows of strings thus offering harpists more freedom of technique than the earlier version.
Many scholars of past times highlighted the qualities and peculiarities of the Arpa Doppia, to name but a few:

A.Agazzari (1578-1640), in his Del sonare sopra'l basso con tutti li stromenti e loro uso nel Concerto of 1607, offers us his description: "L'Arpa Doppia, qual è stromento che val per tutto, tanto ne soprani, come ne bassi, devesi tutta ricercare, con dolci pizzicate, con risposte d'ambi le mani, con trilli ect: insomma vuol buon contraponto".(translation: The Arpa Doppia is an instrument of broad texture which works well both on the high notes and the low ones and it must be played with a delicate touch, aiming for the imitations and the trills etc. In short, it must be played according to the rules of counterpoint.)

P.Trichet (1586-1644) in his Traité des Instruments de Musique of 1640, makes a precise distinction between the two models: between the harp "à double rang" and the harp "à triple rang" and regarding the harp with three rows he adds:
"…il faut avoir beaucoup d'adresse pour toucher subtilement les chordes du milieu engangées parmi les autres…" (translation: ... one must have had much practice in order to delicately pluck the strings of the inner row retained between the others …).

According to B.Giobenardi (1604-1668), harpist and scholar who also pursued interests in the field of organology (Tratado de la musica, 1634), the Arpa Doppia possessed great potential of expression due to the intrinsic possibility the instrument had of executing dynamics within each individual part of the polyphony, an effect he described as being "marvellous".
Moreover, Giobenardi tells us how, in contrast with instruments with keyboards where the sound is only obtained via the keys and pipes, or with plucked instruments where the sound may sometimes be compressed due to the touching of the strings themselves, with the harp the relationship of the interpreter with the sound is direct and not compromised in any way by external mechanisms as with the harp sound is produced in a natural way, by plucking the strings with the fingertips.

M.Mersenne (1588-1648) also left us some good words about our instrument; in his Harmonie universelle published in Paris in 1636, he infers that the Harpe à trois rangs (triple-strung model) seems to have reached its high point.

E G.B.Doni (1595-1647) in his Trattato della Musica Scenica of 1635, includes the Harp along with the Viola, among those musical instruments which for their qualities best represent Antiquity, also declaring that a suave voice, accompanied by the sweetest sound of the Harp, is the most beautiful thing one may happen to hear…